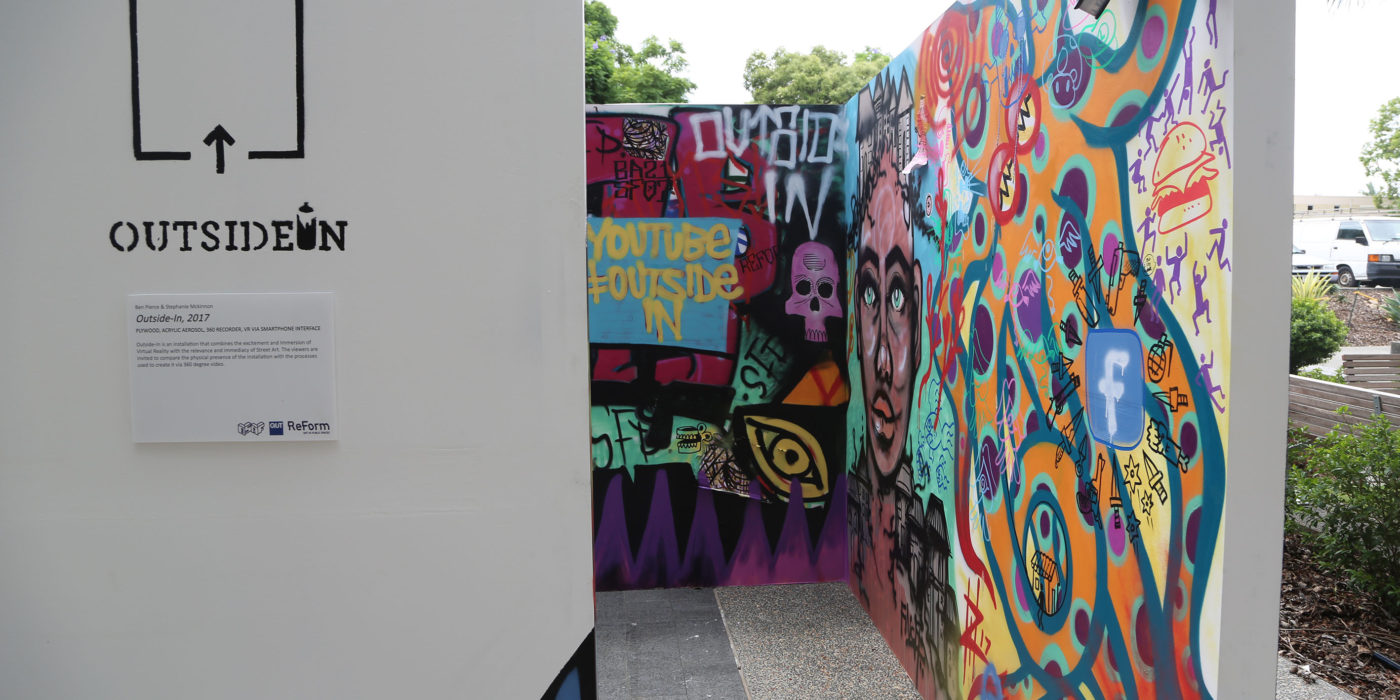 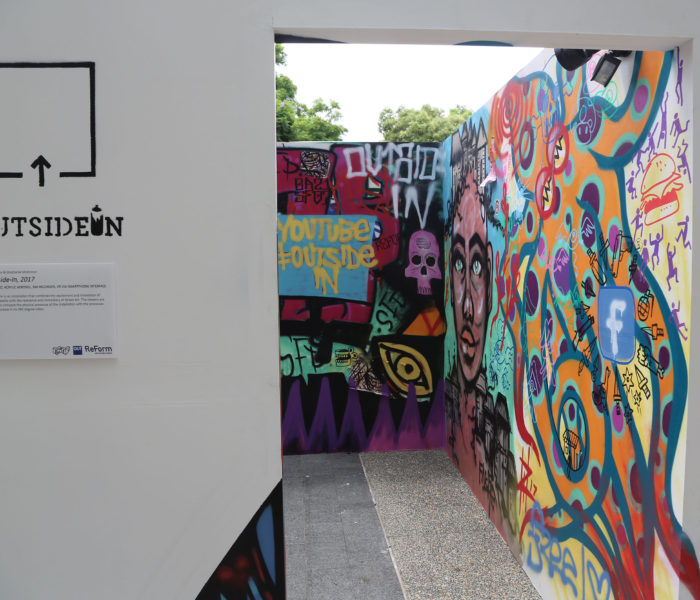 By Grace Kirk
From February 20 till March 3, the QUT Creative Industries Precinct was the site of a number of public art installations. Passerby's were drawn to the ghostly white material hanging from street lights, the blue sculptures that stand in an oval shape and bamboo structure that has been woven into a crisscross formation.

From February 20 till March 3, 2017, the QUT Creative Industries Precinct was the site of a number of public art installations. Visitors were drawn into the campus through ghostly white sheets hanging from street lights; blue sculptures in an oval shape; and a bamboo structure woven into a crisscross formation.

ReForm is a particularly exciting aspect of the festival, featuring installations from QUT students, graduates, staff and alumni.

A recent QUT graduate whose work was featured is sculpture artist Tom Emmett. We were able to catch up with him while he was setting up his site-specific installation, I feared things were going wrong, so the risk was worth taking, which reflects the history of the space.

Bronte Billman and Georgia Fronis have installed their artwork, Revenants, which is a site specific ephemeral installation designed to be activated by the wind, evoking a sense of history within Kelvin Grove. These ghostly figures consist of eight layers of shape shifting white light material varied in texture, size and density. 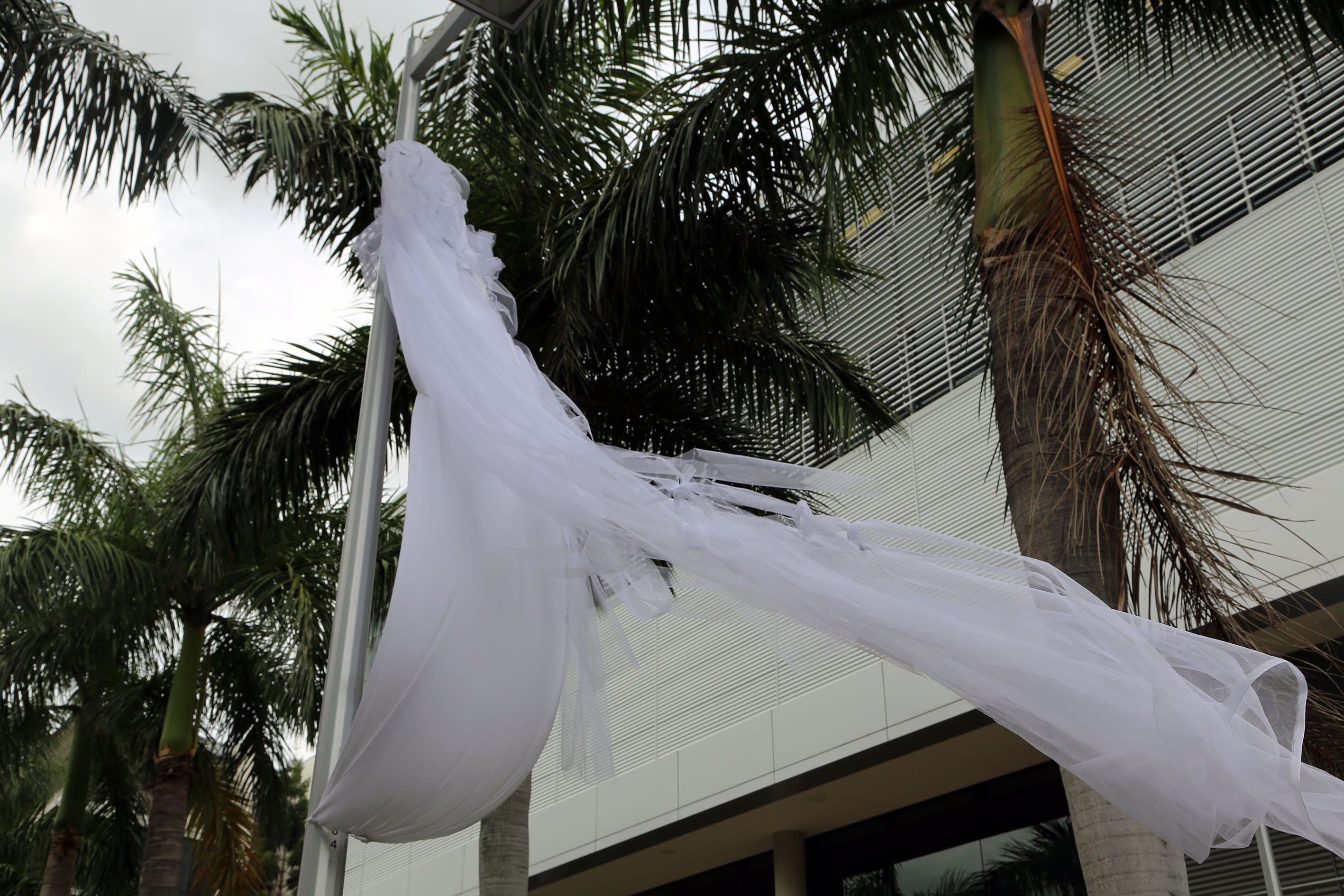 Under the Leopard Trees sits two works by Andy Bates. Aurora and Arc is a physical data visualisation that draws attention to the disparity in treatment of LGBTQIA+ citizens across the major states and territories of Australia. 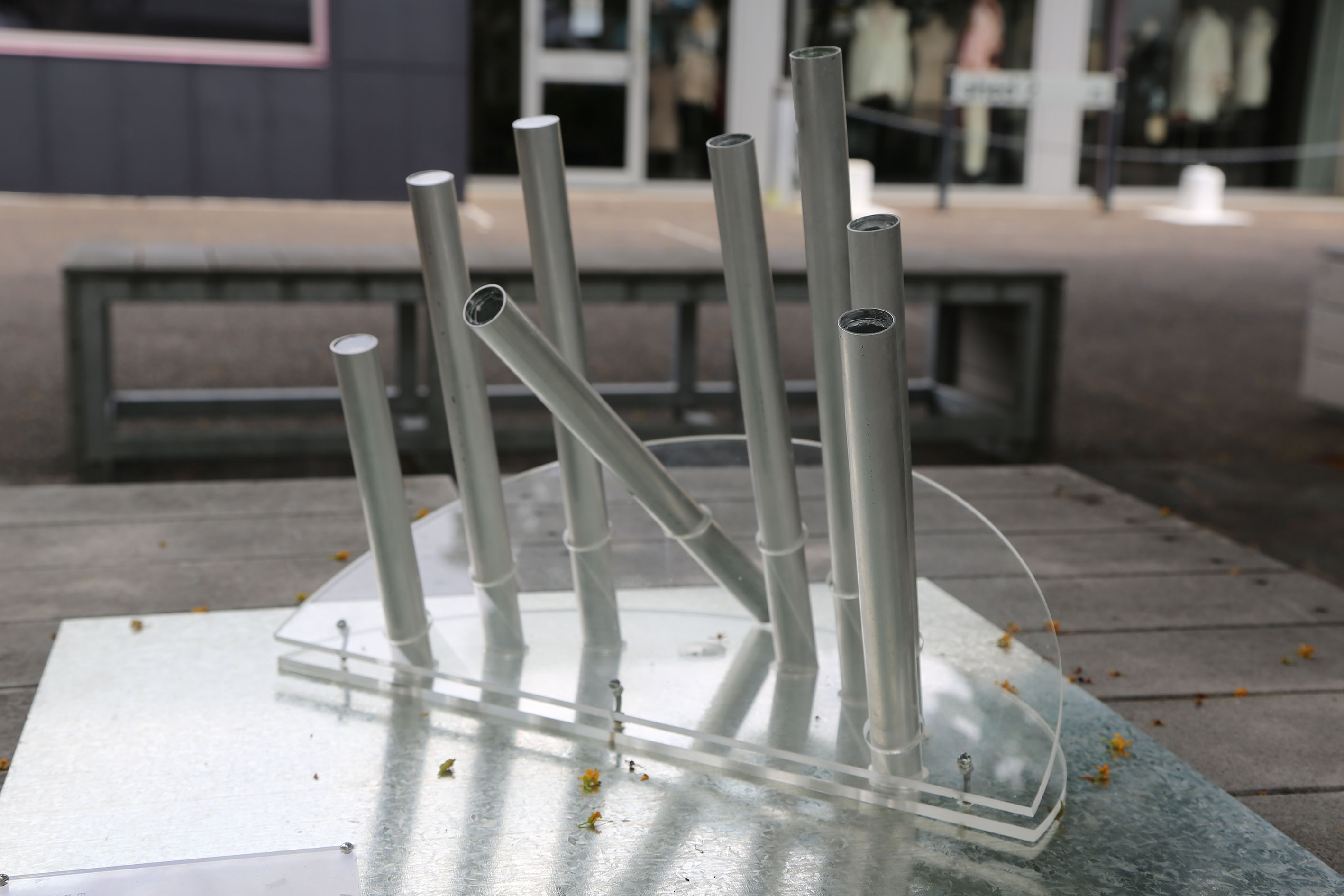 Aurora and Arc by Andy Bates

Division and Dusk also by Andy Bates is a sculptural data visualisation exploring the divided treatment of African lesbian and gay citizens as enforced by national laws. 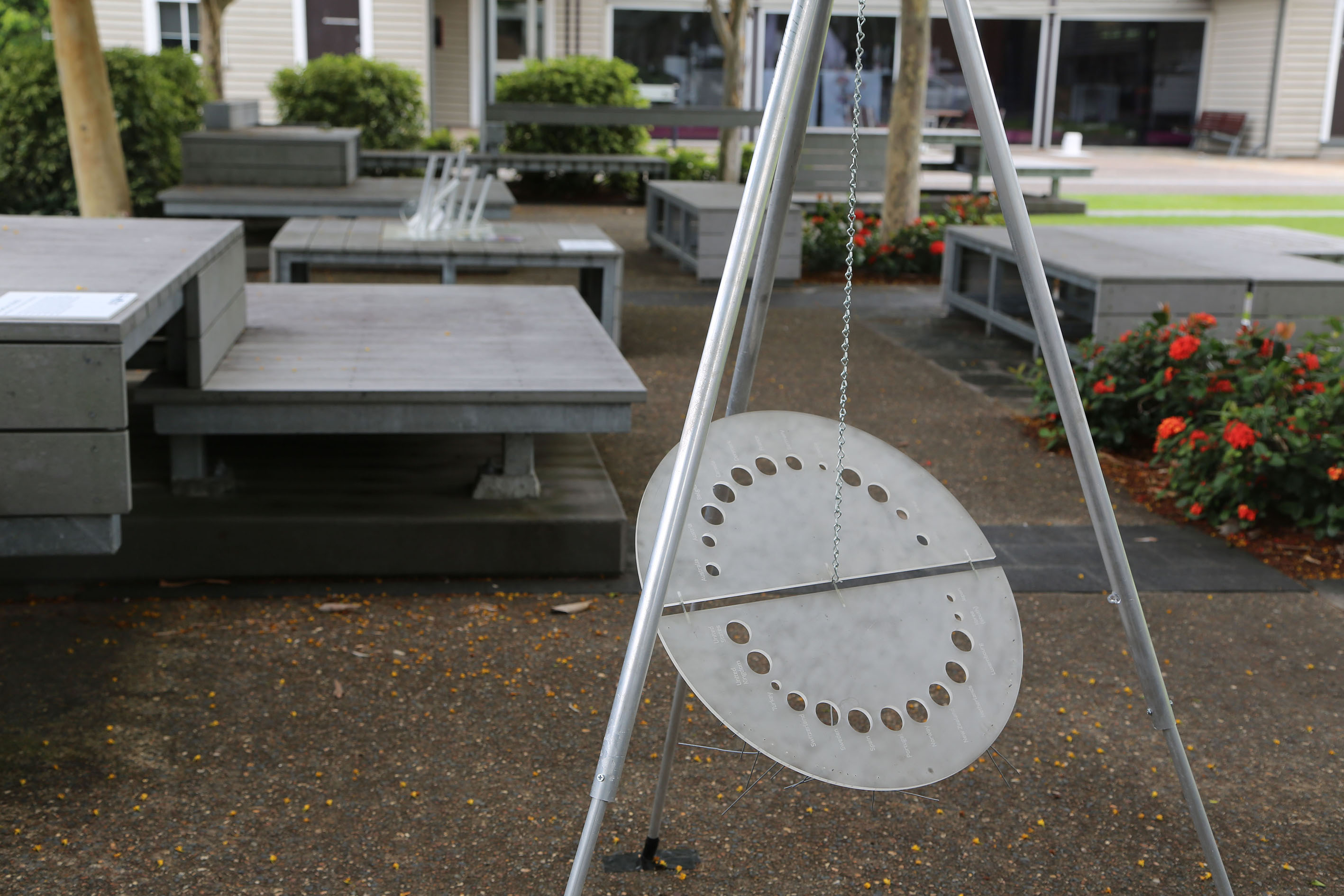 Division and Dusk by Andy Bates

The structure outside La Boite has been taken over by the installation Travelling 2.1  by Torin Francis. Looking up from the ground you can see this artwork, which explores the spatial relationships between pre-existing forms and the form of a displaced object. Using weather balloons, the oppositional interplay between form and the formlessness is playfully explored. 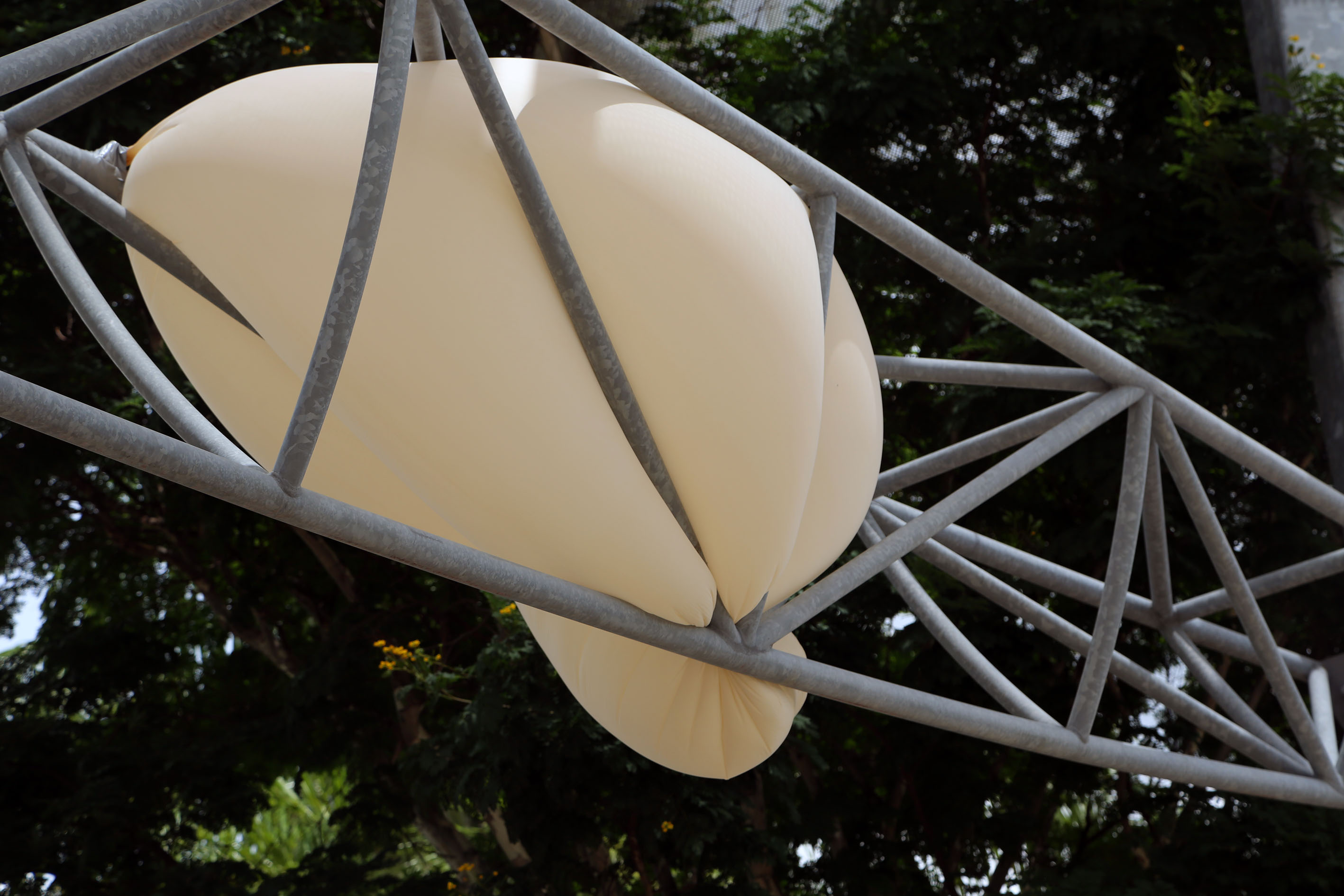 A small field of white flags outside Z2 is Jordan Azcune’s installation Meaningless Surrender. This artwork features uniformed white flags, which will sit as a symbol of surrender during the first week of ReForm and one of empowerment during the second week when he will take to them with spray cans and oil paints. 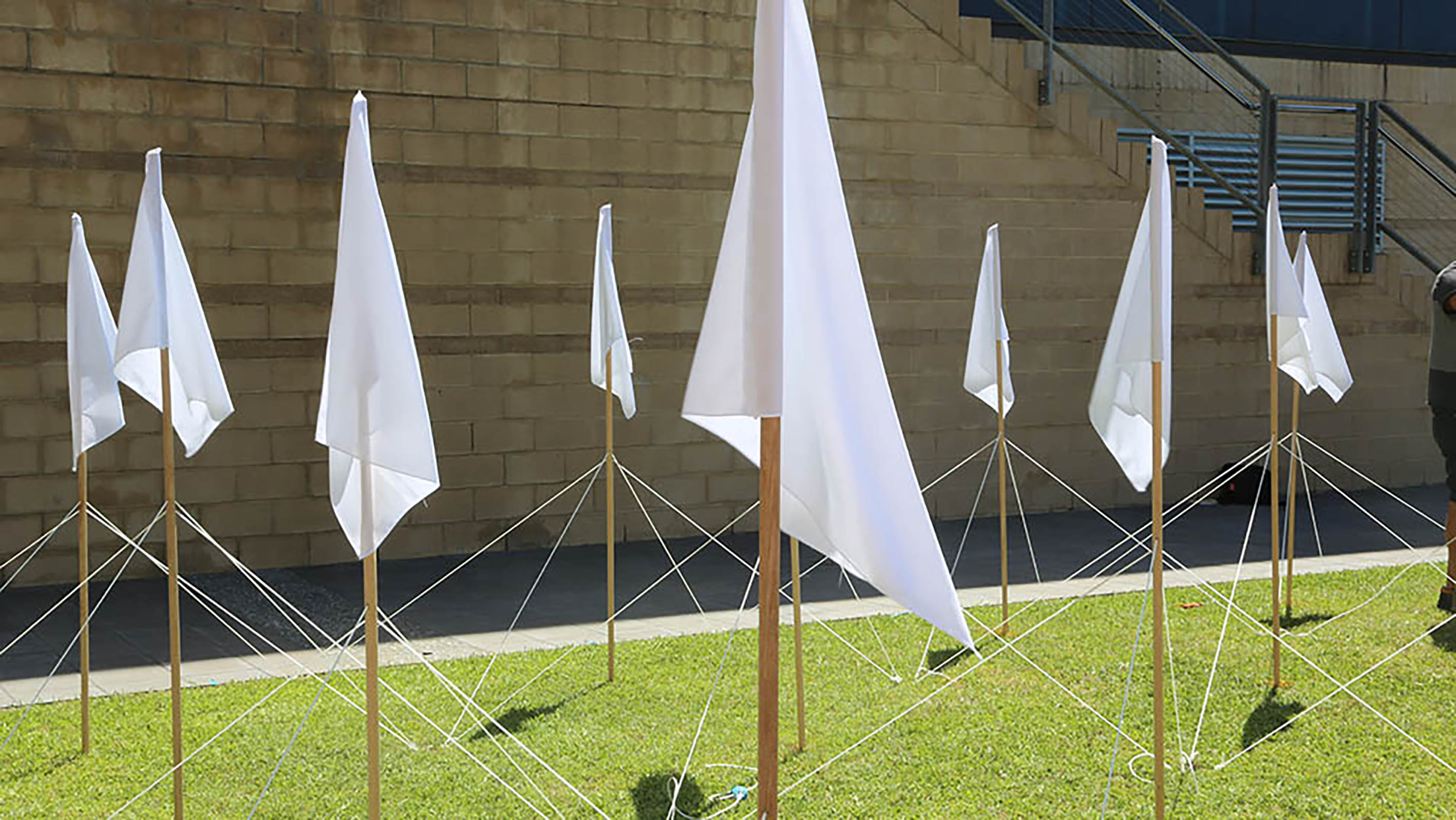 The space outside Z9 is filled with a number of art installations. Outside-In by Ben Pierce and Stephanie Mckinnon is an eye-catching installation that combines the excitement and immersion of Virtual Reality with the relevance and immediacy of Street Art. Viewers are invited to compare the physical presence of the installation with the processes used to create it via 360 degree video. 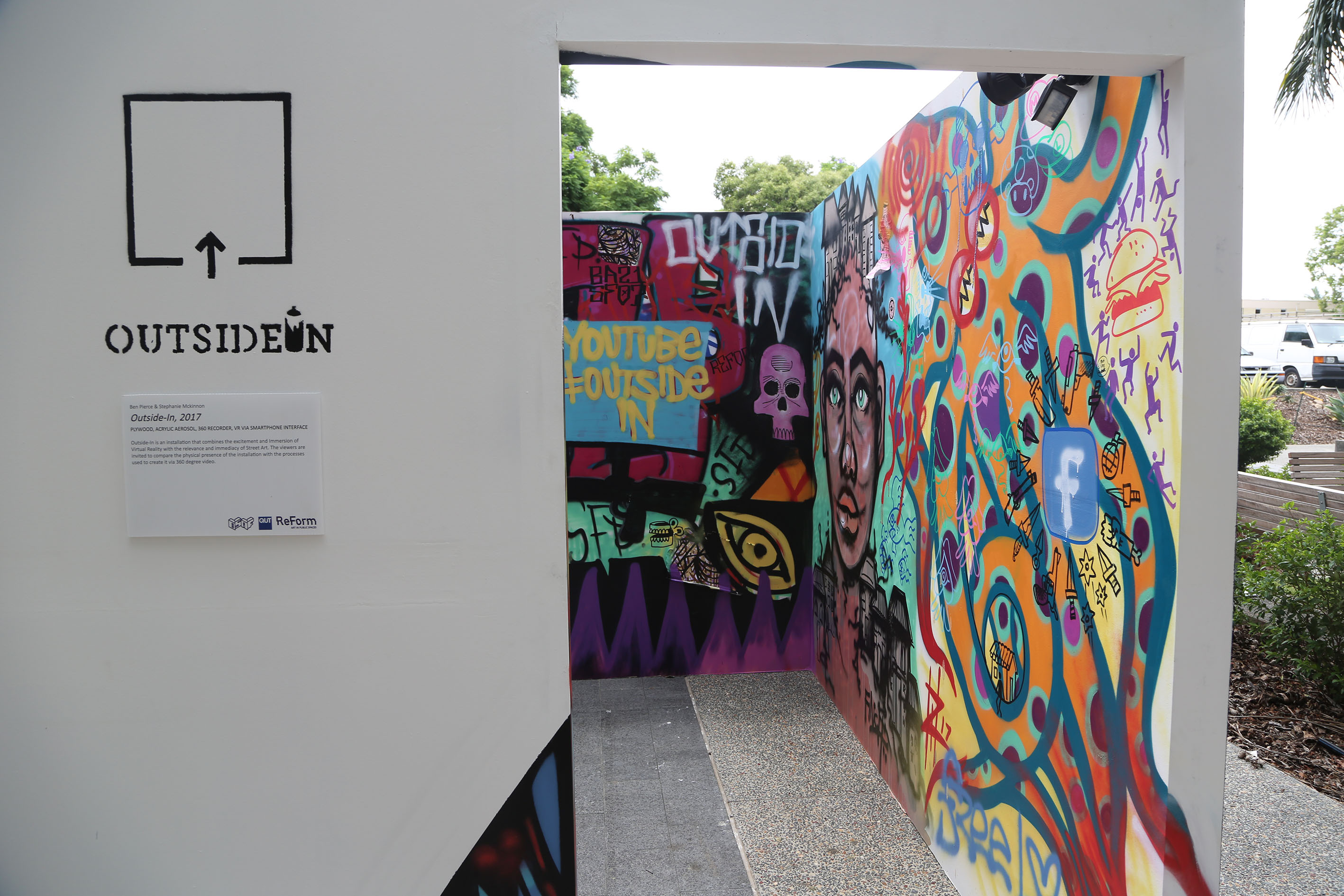 Word’s Worth by Elizabeth Sheppard and Kurt Longland is a visual display that uses words, which have been embedded in the Kelvin Grove Urban Village location. Users are invited to interact with the installation, rearranging and removing the words that are made from laser cut plywood. 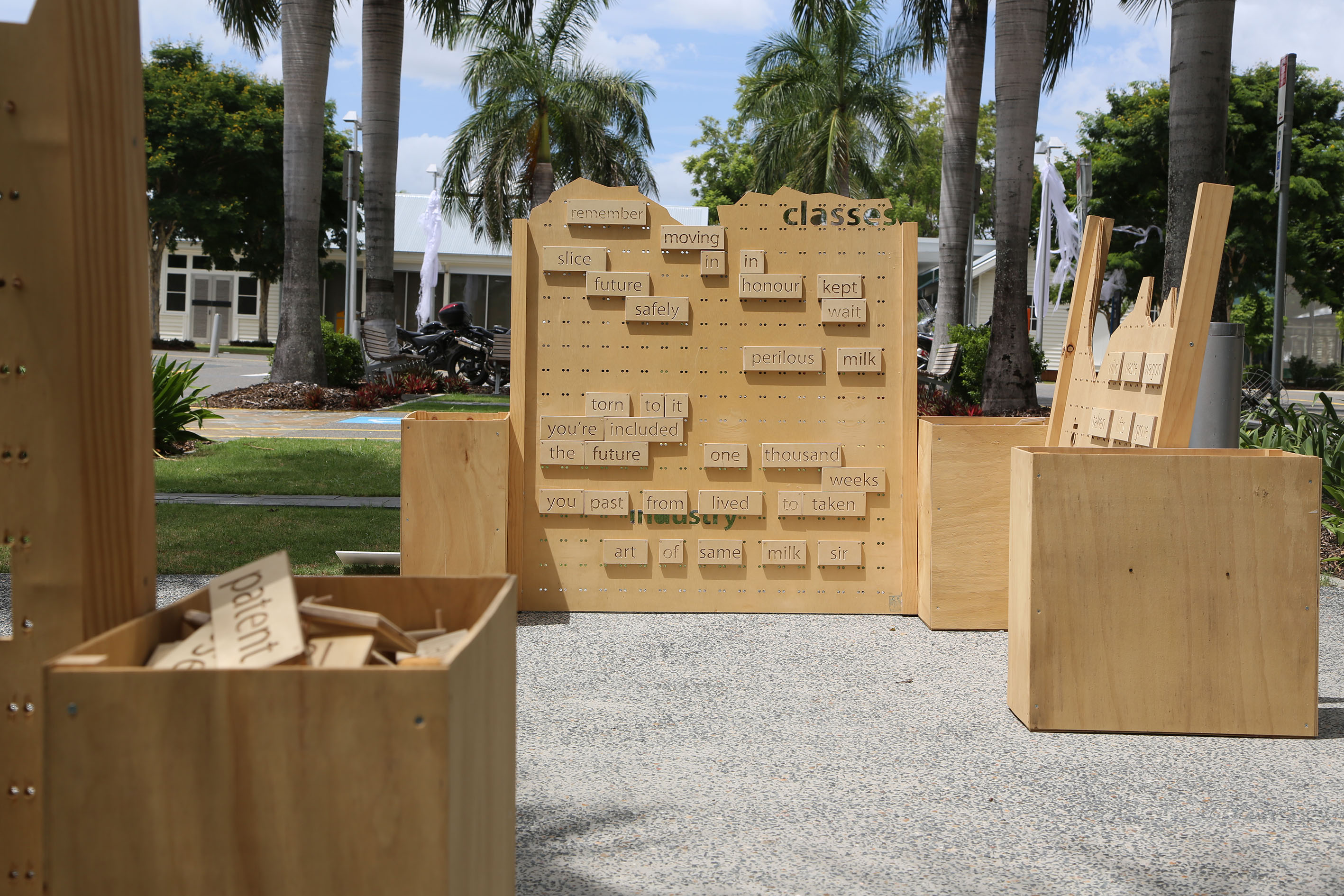 Word’s Worth by Elizabeth Sheppard and Kurt Longland

The two sculptures created by Bambuild can be found in the space outside Z9. Swept Up is a beautiful woven bamboo structure, whose artists used algorithms to find a grid structure that could curl like a wave or feather.

This installation was built by project organisers, Steve Szell, Marissa Lindquist and hunter Eccleston, in collaboration with designers Natalia Salgues and Jason Bell who were the Bambuild QUT competition winners. 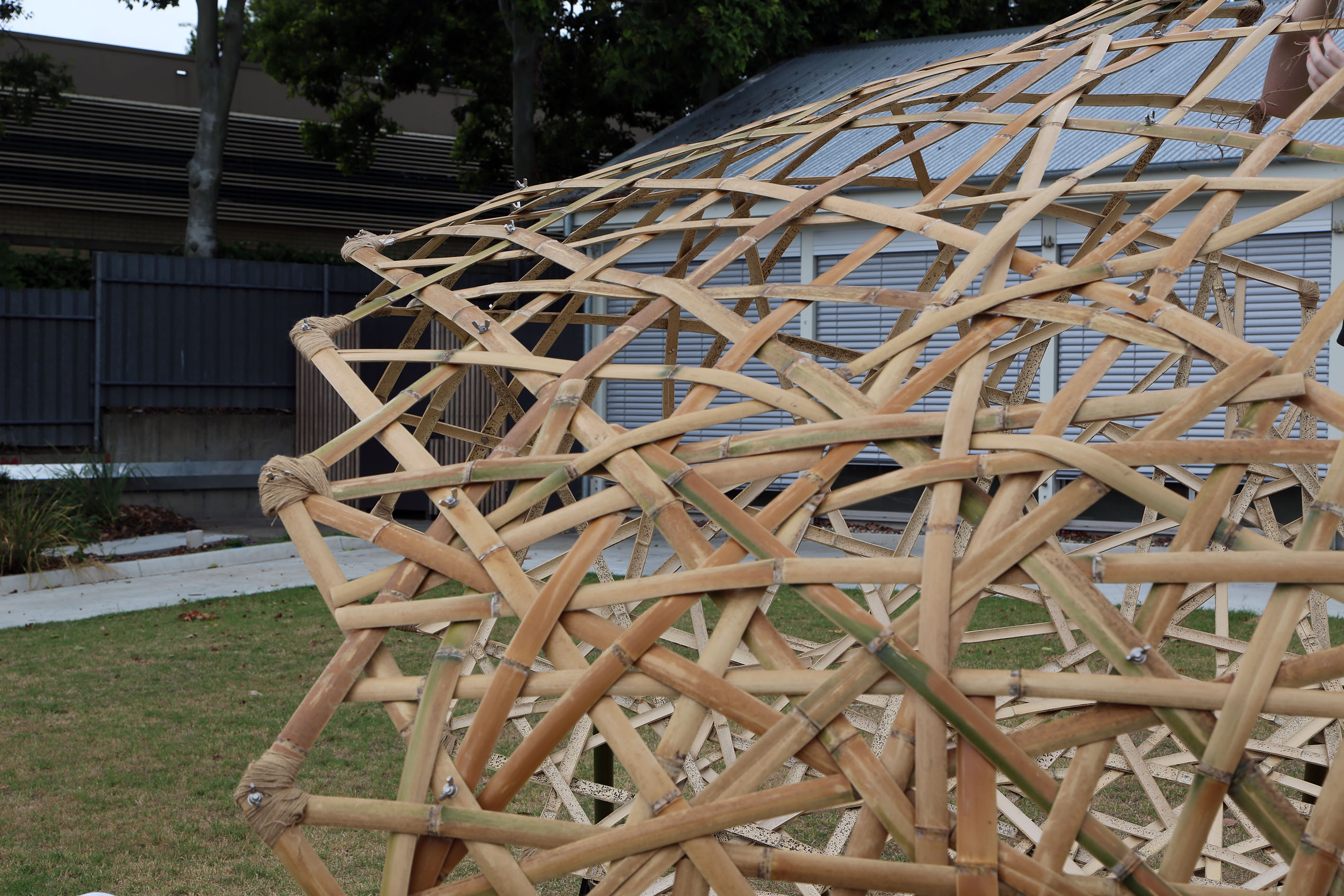 The ReForm program not only exhibited site-specific work, but also a number of workshops open to the public and school programs, in order to encourage community based learning pathways. These workshops include the Bambuild workshop, where participants worked to weave with plants and bamboo, ‘Print It, Wear It’, ‘Out of Character, A Type Workshop’, ‘Slap Ups’, and more. Check out the BSAF timetable to see what’s on and register here.

The ReForm exhibition, held at the QUT Creative Industries Precinct on Musk Avenue is open to the public from 9am – 5pm daily.

For more information on ReForm visit this link. 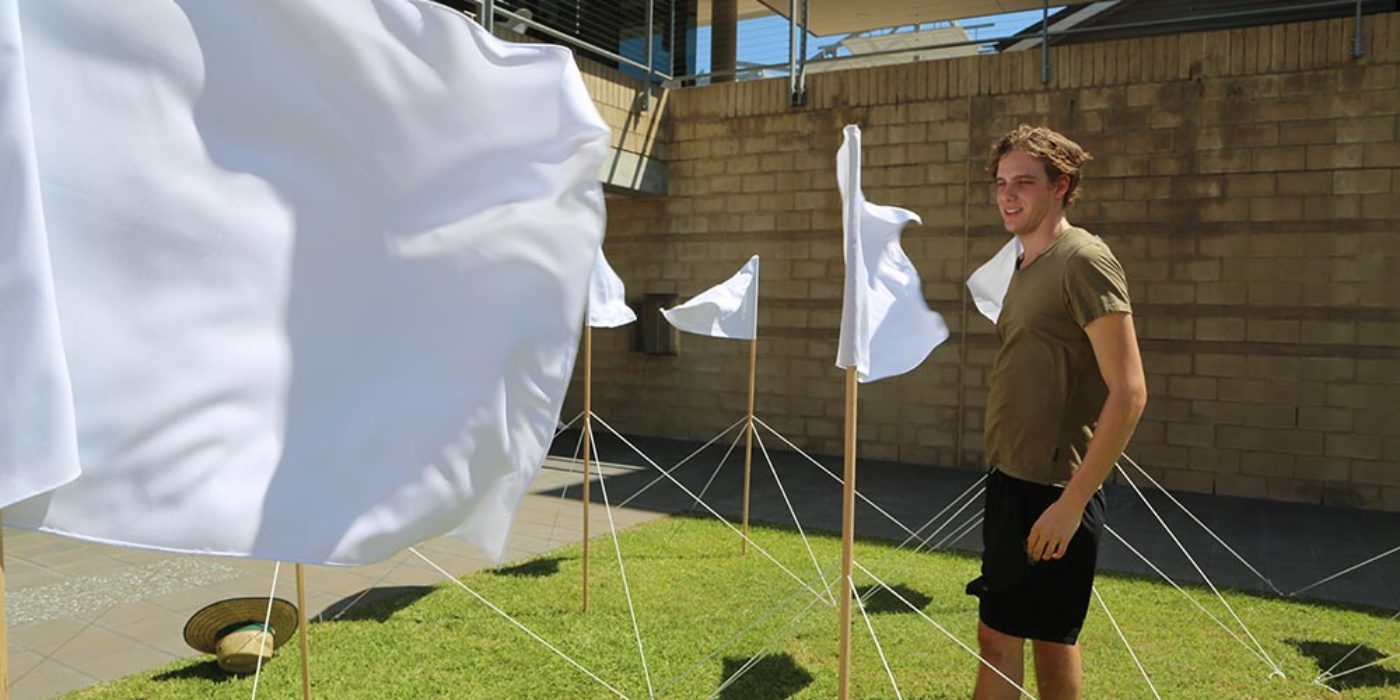 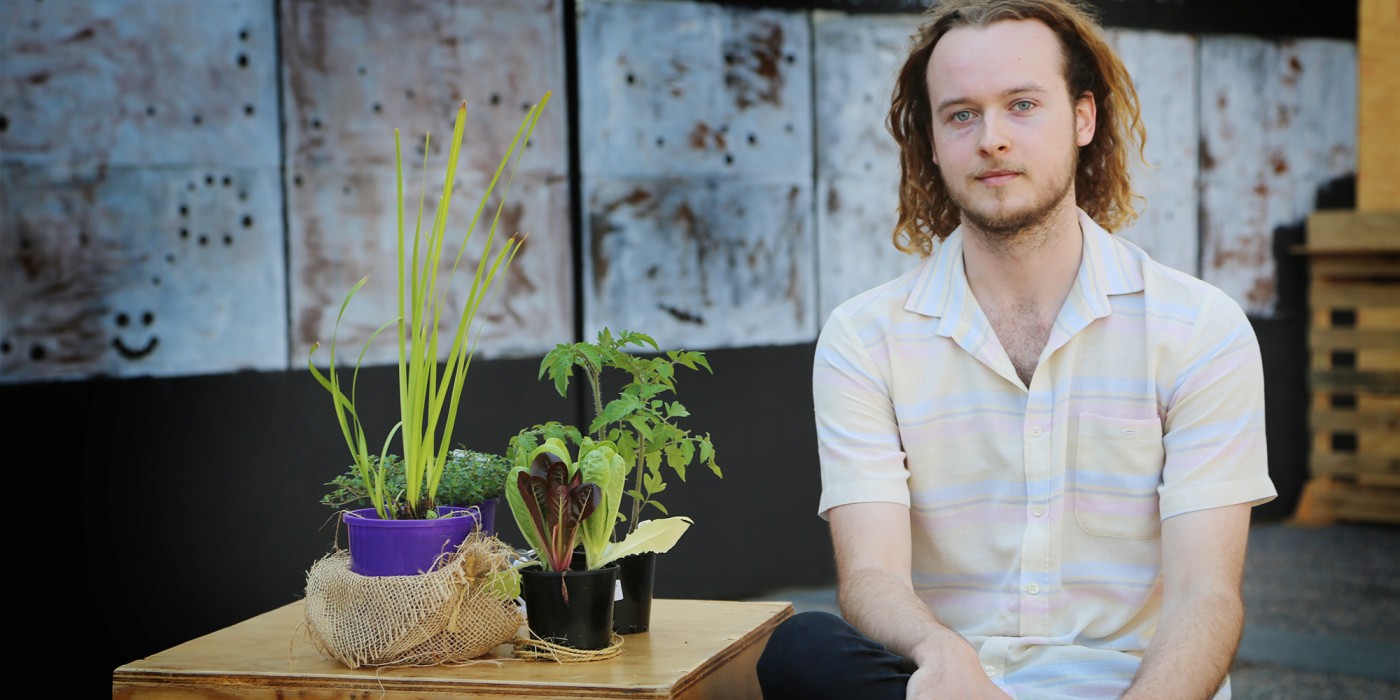 Tom Emmett is an artist, designer, and design writer based in Brisbane.